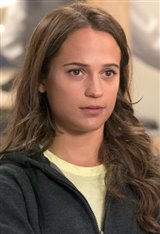 ALICIA VIKANDER Date of Birth: October 3, 1988 Alicia Amanda Vikander was born in Goteburg, Sweden to a stage actress mother, Maria Fahl Vikander, and psychiatrist father, Svante Vikander. Her parents separated when she was five months old and Alicia has five half-siblings on her father’s side. Alicia began her career in television and plays while studying at the Royal Swedish Ballet School for nine years, before she left her professional dance career in 2009 to focus on acting. Alicia started... See All