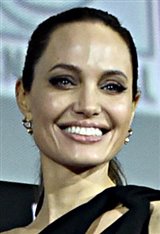 Growing up in Los Angeles, Jolie was no stranger to the film industry as the daughter of Academy Award-winning actor Jon Voight. Since Voight separated from Jolie's mother when Jolie was one, she claims it was her mother, former actress Marcheline Bertrand who influenced her. "She loved taking us to the theater," says Jolie.

She began performing at the age of 12 at the Lee Strasberg Theatre Institute and was in several stage productions. She also worked as a model and appeared in music videos. Her big screen debut came with 1995's Hackers alongside ex-husband Jonny Lee Miller of Trainspotting fame. For her starring role in the HBO movie Gia, she received a Screen Actors Guild Award and a Golden Globe.

Jolie, her stage name, is actually her middle name. Ultimately, Jolie decided to use her middle name as her last because her father was largely absent from her life when she was growing up. Jolie has a fascination for the dark side of life. She originally planned to be a funeral director before becoming an actress, has a extensive dagger collection, reads books on Vlad the Impaler and has the Japanese word for death tattooed on her shoulder.

Jolie started the millennium off with a bang, giving a startling performance in Girl, Interrupted (1999) and winning the Supporting Actress Oscar for her efforts. After her emotional speech at the Oscars, rumors sprang about a incestuous relationship between Jolie and her brother. But Jolie, who denied the accusation, put the rumors to rest when she married actor/director Billy Bob Thornton before the release of the fast action car thriller, Gone in 60 Seconds (2000). Jolie and Thornton later adopted a Cambodian baby boy named Maddox, but just a few months later the couple separated. Their divorce became final in 2003 after only three years of marriage. Jolie's star continues to climb with solid performances in major motion pictures such as Lara Croft: Tomb Raider (2001), Alexander (2004) and Mr. and Mrs. Smith (2005) to her credit.

In 2009 she received her second Academy Award nomination, this time for her work in Changeling (2008), directed by Clint Eastwood. She also tried her hand at directing for the first time with the film In the Land of Blood and Honey (2012) about the Bosnian war in the 1990s. She starred in the Disney film Maleficent (2014). In 2015, she directed and starred in By the Sea alongside Brad Pitt, and once again lent her voice to the animated sequel Kung Fu Panda 3 (2016). In 2019, she returned to the role of Maleficent in Maleficent: Mistress of Evil. Next up, she'll star as Thena in Marvel's Eternals (2020).

On July 6, 2005, she adopted a newborn baby girl from Ethiopia and named her Zahara. Jolie began dating her Mr. and Mrs. Smith co-star, Brad Pitt, in 2004 and gave birth to their daughter, Shiloh Nouvel Jolie-Pitt, on May 27, 2006 in Namibia, Africa and twins Knox Leon Jolie-Pitt and Vivienne Marcheline Jolie-Pitt on July 12, 2008. She also adopted a three-year-old Vietnamese boy, Pax, in March 2007. Pitt legally adopted Jolie's three children and in 2014, they were married. They had three children together but filed for divorce in 2018 after a bitter separation.