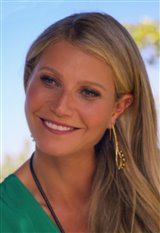 Gwyneth Paltrow used to be a bad girl. In her words: "I used to be so bad I had a curfew of noon."

The daughter of Tony award-winning actress Blythe Danner and producer/director Bruce Paltrow (St. Elsewhere), she grew up in Los Angeles (the family moved to New York when she was 11) surrounded by show business people. Her mother acted in summer stock and it was in one of these productions that the five-year-old Paltrow had her first walk-on role. Eventually she gravitated to more complex stage assignments until 1991 when she stopped fighting what was in her genes and dropped the art history courses she was taking at the University of California to pursue an acting career.

This is the part where having parents in the business really helps, especially when dad knows Mr. Hollywood himself, Steven Spielberg. It seems Paltrow was attending a screening of Silence of the Lambs with her father and his friends Steven Spielberg and Kate Capshaw. Spielberg took a look at Paltrow and offered her a part in Hook (1991). Needless to say, she accepted.

Other parts followed, leading to a role in Se7en where she not only increased her fame by turning into a good performance but also by hooking up with her leading man, Brad Pitt. Suddenly Brad and Gwyneth frenzy was in full swing as the media descended upon the couple. The couple split in December 1996 and Pitt went on to marry Jennifer Aniston. In a 2003 interview with Diane Sawyer, Paltrow spoke up about her relationship with Pitt, saying, "I just made a big mess out of it. I was very upset for a long, long time. I felt really bad about myself for a long time - probably a good five years. I felt really responsible, and also like I was the architect of my own misery."

However, her career was going extremely well, and she mastered a British accent to play the title role in Emma (1996) and then won an Oscar and a Golden Globe for her performance in the acclaimed feature Shakespeare in Love (1998). She was directed by her father in Duets (2000), and although the film wasn't a box office success, the Paltrows were just happy to finally have the chance to work together.

But Paltrow's personal life took another blow following the death of her father in October 2002. Deeply depressed, Gwyneth finished filming the feature Sylvia (2003), playing real life poetess Sylvia Plath, then dropped out of two films to take a break before filming Proof (2005), playing the role of a daughter who comes to the aid of her dying father.

Things finally began to look up for Paltrow in December 2003 when she found out that she and longtime boyfriend, Coldplay singer Chris Martin, were expecting a child. They were married on December 5, 2003 and their daughter, Apple Blythe Alison Martin, was born on May 14, 2004 in London, England. In 2006, she gave birth to a son, Moses Bruce Anthony Martin, in New York City. On December 13, 2010, she received a star on the Hollywood Walk of Fame.

She kept busy after giving birth, with the role of Pepper Potts in Iron Man (2008) and Iron Man 2 (2010). In Country Strong (2010) she did her own guitar playing and singing for her role as a country music star. She sang the title song from the movie while accompanying herself on acoustic guitar live at the Country Music Awards on November 10, 2010. Less than a week later, Gwyneth showed off her vocal skills again when she guest starred on the hit series Glee as the coolest substitute teacher ever, performing "Forget You" by Cee-Lo Green. She went on to reprise her role as Pepper in Iron Man 3 (2013), Spider-Man: Homecoming (2017) and Avengers: Infinity War (2018).

Gwyneth currently plays a lead role on the Netflix series The Politician (2019).