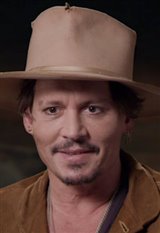 The high school dropout played with more than 15 rock bands before making his first movie, Wes Craven's A Nightmare On Elm Street. After the boys 'n bimbos flick Private Resort, he won a small part as the translator in Oliver Stone's Platoon.

Ever adventurous in his choice of roles, Depp rejoined Burton for Ed Wood, a deliriously campy—yet genuinely heartfelt—biography of the infamously awful cross-dressing moviemaker. He shared the screen with Marlon Brando in Don Juan Demarco. He gloomily trudged through Jim Jarmusch's cinematic death march, Dead Man. And despite his character's mantra to "fugget about it", Depp was truly memorable alongside Al Pacino in Donnie Brasco. His directing debut, The Brave, premiered at the 1997 Cannes Film Festival.

Equally interesting off-screen as on, Depp's romances have earned him more press than his acting abilities. His tattooed promise of eternal love to Winona Ryder has been changed from "Winona Forever" to "Wino Forever" and he was busted for trashing a New York hotel suite in a jealous squabble with professional waif Kate Moss. Depp is also part owner of the ultra-hip Sunset Strip nightclub The Viper Room.

He settled down for a time as a family man with French singer Vanessa Paradis, with whom he shares a daughter, Lily-Rose Melody and a son, Jack. Says Depp about the birth of his first child, "Anything I've done up till May 27, 1999 was kind of an illusion, existing without living. My daughter, the birth of my daughter, gave me life."

In 2003 his portrayal of Captain Jack Sparrow in Pirates of the Caribbean: The Curse of the Black Pearl won him much critical acclaim. The film was one of the top box office draws of the year, and Depp earned both a Golden Globe nomination and an Oscar nod for his audacious performance. The next year he again received nods from the Oscars and Golden Globes, this time for playing a very different role, that of sensitive, imaginative playwright J.M. Barrie in Finding Neverland (2004). He finally won a Golden Globe (as well as receiving another Oscar nomination) for his work in Sweeney Todd: The Demon Barber of Fleet Street (2007). In 2011, he received two Golden Globe nominations for Best Actor for his work in Alice in Wonderland(2010) and in The Tourist (2010).

He filmed a fourth Pirates movie: Pirates of the Caribbean: On Stranger Tides (2011) and voiced the lead character in the animated feature Rango (2011), with former Pirates director Gore Verbinski, then played the vampire Barnabas in the Tim Burton movie Dark Shadows (2012).

While filming The Rum Diary (2011), Depp fell in love with his co-star, Amber Heard, who was in a long-term lesbian relationship. They both dropped their respective lovers to move in together and Depp reportedly also gave up alcohol for Heard. They were married February 3, 2015.

His latest credits include another installment in the Pirates of the Caribbean franchise, titled Pirates of the Caribbean: Dead Men Tell No Tales (2017), the murder mystery film Murder on the Orient Express (2017) and played Gellert Grindelwald in Fantastic Beasts and Where to Find Them (2016), as well as its sequel, Fantastic Beasts: The Crimes of Grindelwald(2018).

In addition to his movie career, Depp also has a great love for music. He was a member of the band "P" and has also performed with Oasis. Depp has also musically contributed to the soundtracks of "Chocolat" and "Once Upon a Time in Mexico."

On May 22, 2016, Amber Heard filed for divorce after one year and three months of marriage. Their split was finalized with the divorce in January 2017.