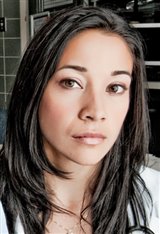 MAYKO NGUYEN Date of Birth: April 19, 1980Vancouver-raised Mayko Nguyen won first place in the 15-19 age group at the Firehall Art Centre's 1997 Be Scene Talent Contest. Before landing a starring role in the Canadian film Going the Distance (2004), she had been making a name for herself in the industry with small roles on TV shows such as Mysterious Ways and in independent shorts such as Great Expectations, Sophisticated Boom Boom and Devitrified. She also played a regular role as Mayko Tran in... See All