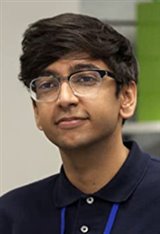 Nik Dodani was born in Dallas, Texas, but grew up in Phoenix, Arizona, where he attended BASIS Scottsdale. After graduating from BASIS Scottsdale in 2011, Nik went on to pursue politics at Occidental College in Los Angeles. In 2008, Nik made his acting debut in the television film Living With Abandon (2008), in the role of Paku. In 2016 he made his big screen debut, appearing in the film Other People (2016), where he played Ron. In the same year, Nik appeared in two more films, Goodbye, Felix... See All