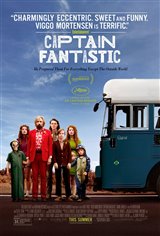 Ben (Viggo Mortensen) is a devoted father of six children. They live a secluded life in the isolated forests of the Pacific Northwest. The children, who never come into contact with any other people, are raised on a rigorous physical and intellectual schedule. They hunt for their own food, with large, serrated Bowie knives. When their mother, who's been hospitalized due to a number of mental ailments, commits suicide, the children want to attend her funeral.

Against his will, Ben takes them on the journey. He knows his wife's family doesn't agree with his ideas about raising children. His father-in-law, Jack, even threatens to have him arrested if Ben shows up at the funeral. Nonetheless, they go, only to find that Jack and his wife Abigail want to take custody of the children away from Ben.