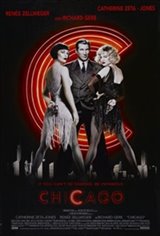 Watch Trailer
Everyone loves a legend, but in Chicago, there's only room for one. Velma Kelley (Zeta-Jones) burns in the spotlight as a nightclub sensation. When she shoots her philandering husband, she lands on Chicago's famed murderess row, retains Chicago's slickest lawyer, Billy Flynn (Gere), and is the center of the town's most notorious murder case, only increasing her celebrity.

Roxie Hart (Zellweger), seduced by the city's promise of style and adventure, dreams of singing and dancing her way to stardom. When her abusive lover tries to walk out on her, she too ends up in prison. Billy recognizes a made-for-tabloids story, and postpones Velma's court date to take on Roxie's case. Infamy is Roxie's ticket to stardom. Billy turns her crime of passion into celebrity headlines, and in this town, where murder is a form of entertainment, she becomes a bona-fide star -- much to Velma's chagrin.

As Roxie fashions herself as America's sweetheart, Velma has more than a few surprises in store, and the two women stop at nothing to outdo each other in their obsessive pursuit of fame and celebrity.

Based on both the hit Broadway musical, and the play by Maurine Dallas Watkins.