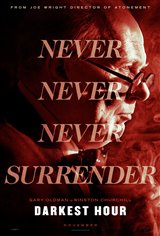 Set in the early days of World War II, Darkest Hour follows Winston Churchill (Gary Oldman) as he is made Prime Minister of the United Kingdom when the former prime minister steps down.

Although unpopular within "the Establishment," he wins the hearts of the British people as he vows to never surrender, fighting Hitler's Nazi army no matter what they do to try to take over Britain.