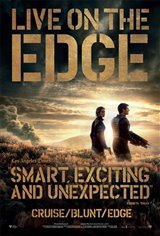 Despite his military ranking, Major William Cage (Tom Cruise) has never experienced combat. During a war against an invading alien race, he's suddenly assigned what amounts to a suicide mission and is killed within minutes. Yet he finds himself alive again and in a time loop that forces him to live out the same combat that got him killed - over and over.

There's one difference - each time, Cage's tactical abilities grow stronger as he builds skills, alongside Special Forces warrior Rita Vrataski (Emily Blunt). With Rita's help, Cage learns to fight the aliens and each time they engage in battle, they get one step closer to winning the war.

Based on the novel "All You Need is Kill" by Hiroshi Sakurazaka.