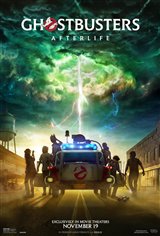 Phoebe (Mckenna Grace), Trevor (Finn Wolfhard) and their mother Callie (Carrie Coon) are almost broke, so they move into their grandfather's old farmhouse just outside the small town of Summerville, Oklahoma, which is experiencing mysterious tremors. Phoebe soon discovers secrets within the house and brings one of her discoveries to her science class, where her teacher Mr. Gooberson (Paul Rudd) recognizes the device as a ghost trap.

He then gives her a history lesson on ghost sightings from 30 years ago. With ghost sightings now popping up all over town, Phoebe and her brother find the old Ecto-1 and take up the mantle of the disbanded Ghostbusters to take on this new threat.

Filmed mostly in Alberta. Director Jason Reitman is from Montreal. Several members of the cast, including stars Finn Wolfhard (Vancouver) and Dan Aykroyd (Ottawa) are Canadian.