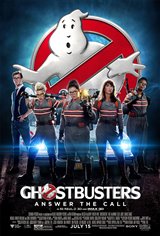 Scientist Erin Gilbert (Kristen Wiig) is enjoying her job at a prestigious college until she finds out Abby Yates (Melissa McCarthy), with whom she wrote a book about the paranormal years earlier, has ordered reprints of the book and is selling it online. Worried because the scientific world ridicules those who believe in ghosts, Erin tracks Abby down and begs her to burn the books.

However, at Abby's lab, they discover a ghost is haunting a historical site and they're called in to investigate. With new proof that ghosts exist, Erin and Abby team up again, along with Abby's hilarious partner Jillian Holtzmann (Kate McKinnon). When a gorgeous but unbelievably ditzy blond named Kevin Beckman (Chris Hemsworth) applies to be their receptionist, Erin hires him on the spot.

Subway worker Patty Tolan (Leslie Jones) is one of their first customers after she spots an entity on the tracks and reports it to them. They let her join the team when she promises to provide them with access to a car. Meanwhile, Kevin, who wants to be a Ghostbuster himself, is taken over by an evil ghostly entity and it's up to the girls to save him.