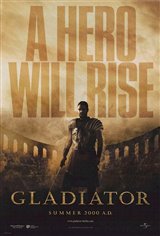 Maximus (Crowe) is a brave and loyal military general to the Emperor Marcus Aurelius (Harris). His loyalty does not go unnoticed as the Emperor makes preparations for Maximus to succeed him after his death. But when the Emperor's son, Commodus (Phoenix) finds out, he kills his father and orders the death of Maximus. While he escapes, his wife and son are brutally murdered. He then ends up a slave in North Africa and is sold to become a gladiator.

Trained by Proximo (Reed), a former gladiator himself, Maximus wins every battle and soon finds himself sent to Rome to take part in the Gladitorial Games. It is here that he plans to plot his vengeance and gain his freedom.

While all this is going on, his past lover, the Emperor's daughter (Nielsen) works to restore democratic rule with the help of a civil-minded senator (Jacobi).