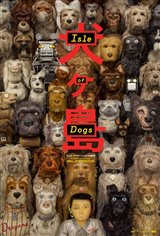 Twenty years in the future, Japan has an abundance of dogs. So many that they can't contain them all. The politicians decide to exile the canines to an island where trash is dumped. Rex, King, Duke, Boss and Chief form a band of alpha dogs who vow to find better food than what's left in the garbage.

When a 12-year-old boy crashes his self-made airplane on the island to look for his lost dog Spot, the alpha dogs and the other dogs on the island team up to help him.