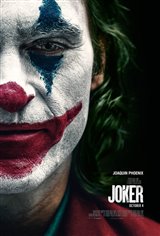 Arthur Fleck (Joaquin Phoenix) lives with his frail mother, Penny Fleck (Frances Conroy), and devotes himself to caring for her. He wants to live up to her nickname for him—Happy. During the day, he paints his face and works as a clown through a service called Ha-Ha's, but he dreams of being a stand-up comic. He tries to learn from watching other comics, listening to their tone and timing in an effort to replicate it. Unfortunately, others don't relate to what he finds funny.

Insecure and awkward, Arthur has difficulty relating to others. As he struggles to find a connection in Gotham City’s fractured society, the toxic environment wears at him—the lack of compassion and empathy, the loss of civility—especially after he's bullied by teens on the street. Caught in a cyclical existence between apathy and cruelty, Arthur makes one bad decision after another, cementing his destiny and setting off a chain reaction of escalating events.