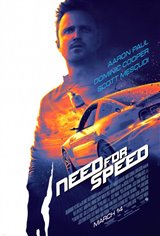 Tobey Marshall (Aaron Paul) learns that the small garage he inherited from his father is on shaky ground and that he is unable to make the bank payments. Dino Brewster (Dominic Cooper) hires Tobey and his friends to work on his Ford Mustang, that Carroll Shelby, the legendary race car driver, was building before he died. Not only is this an exciting opportunity, but the cash inflow could save the garage. After the Ford Mustang is successfully built, an unsanctioned race brings tragic results and Dino winds up framing Tobey for manslaughter.

Two years later Tobey is released from prison on parole and he is determined to get his revenge. Knowing that Dino will be entering the famous winner-takes-all cross-country De Leon race, Tobey, with the help of his friends, breaks parole by joining the race in an attempt to take down Dino. He borrows the same Shelby Mustang that started it all. However, Dino finds out about Tobey's plan and launches a bounty hunt to capture him dead or alive.

Based on the popular racing video game franchise of the same name.