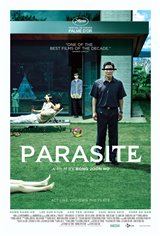 The Kim family, including high school graduate Ki Woo (Choi Woo Shik) and his sister, Ki Jung (Park So Dam), live in a cramped apartment in a grubby part of Seoul with their father, Ki-taek (Song Kang Ho), and mother, Chung Sook (Chang Hyae Jin). Unable to get jobs, they make some money folding and assembling pizza boxes for a nearby restaurant. Despite being unqualified, Ki Woo gets a job as an English tutor for an upper class teenage girl, Da Hye (Jung Ziso).

Ki-woo meets her family, the Parks, who live in a gated mansion with a high-tech security system. Da Hye’s father, Dong Ik (Lee Sun Kyun) is a millionaire tech titan. Also living in the luxurious home are Da Hye's younger brother, Da Song (Jung Hyeon Jun) and her mother, Yeon Kyo (Cho Yeo Jeong). When Yeon Kyo tells Ki Woo that her son needs an art teacher, he tells her he knows someone. His sister quickly Googles all she needs to know to take on the position, and gets the job. The siblings keep their relationship a secret and soon, the entire Kim family is employed by the Parks, after getting rid of the current staff. When a former servant threatens to expose the Kims, things get violent.