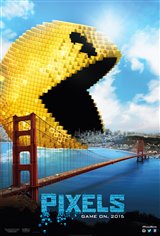 When aliens see video feeds of classic arcade games, they misinterpret them as a declaration of war. They attack Earth, using the games as models for their various assaults.

President Will Cooper (Kevin James) has to call on his best friend from childhood, video game champ-turned-home theater installer Sam Brenner (Adam Sandler) to lead a team of old-school arcade gamers on a mission to defeat the aliens and save the planet.

Canadian Connection: Filmed in Toronto, Hamilton and Cobourg, Ontario. Some members of the cast are Canadian, including Dan Aykroyd.