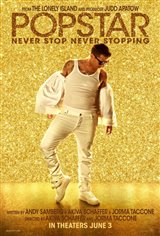 Singer/rapper Conner4Real (Andy Samberg) has shown remarkable musical talent since he was a little boy. As soon as he could, he formed a band. Not long after, he becomes a superstar, with big names through the music industries touting his talent. He has a huge staff that caters to his every whim. As Conner says, "It takes a village to make me look dope."

However, he faces a crisis of popularity after his sophomore album flops, leaving his fans, sycophants and rivals all wondering what to do when he's no longer the dopest star of all.