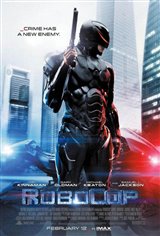 It’s the year 2028 and OmniCorp is the ruler of robot technology. Although their drones have been used by the military overseas and have been keeping countries at peace, Americans don't want robots ruling their country. OmniCorp is adamant that America will benefit from these robots and found the perfect solution how to bring them to the country.

When Alex Murphy (Joel Kinnaman), a loving father, husband and Detroit cop, becomes injured in the line of duty, OmniCorp steps in and builds a part-man, part-robot, which they call the RoboCop because he's practically invincible. The company believes RoboCop can protect citizens in every city but things go awry when they fail to remember that there is still a living man inside the machine.