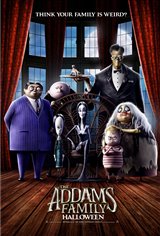 The Addams Family are back on the big screen in the first animated comedy about the creepy and kooky clan.

Based on characters from the comics created and drawn by Charles Addams.