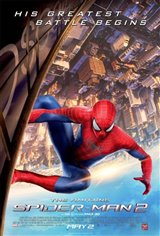 Peter Parker/Spider-Man (Andrew Garfield) meets up with Harry Osborn (Dane DeHaan), but hides his secret identity from his old friend. Harry reveals that Oscorp has Peter under surveillance. Peter also finds out what it was that Oscorp wanted to use his father's research for and comes to the realization that nothing is what he thought it was.