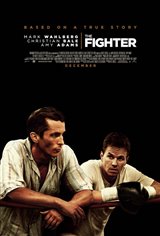 THE FIGHTER is the inspirational, true story of two brothers who, against all the odds, come together to train for a historic title bout that will unite their fractured family, redeem their pasts and, at last, give their hard-luck town what it's been waiting for: pride.

The story unfolds on the gritty, blue-collar streets of Lowell, Massachusetts, where Dicky (Christian Bale) was once known as "The Pride of Lowell" having gone the distance with the world champion Sugar Ray Leonard; however, after losing that fight, like the town of Lowell, Dicky's fallen on hard times. His boxing days are behind him and his life has become shattered by drug abuse.

Younger brother Micky (Mark Wahlberg), meanwhile, has become the family's fighter and fading hope for a champion. But despite all of his work, Micky's career is failing and he loses fight after punishing fight. Dicky and Micky's tougher-than-nails mother, Alice (Melissa Leo), manages his career and Dicky serves as his highly unreliable trainer. When Micky's latest fight nearly kills him, it looks like it could all be over—until his iron-willed new girlfriend, Charlene (Amy Adams), convinces him to do the unthinkable: split with his family, pursue his own interests and train without his increasingly volatile and criminal brother.

Now Micky has the chance of a lifetime as he earns a shot at the World Championship. But when his brother and dysfunctional family reenter his life, they must all reconcile their pasts and become more than just a family in name. With Micky and Dicky reunited, this becomes more than just a fight—it's an all-out comeback for these brothers, their family, and their city.