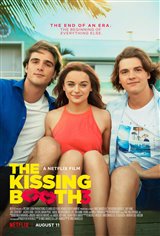 It’s the summer before Elle (Joey King) heads to college, and she still hasn't decided which college she wants to go to — Berkeley in California with her best friend Lee (Joel Courtney), like they'd always planned? Or should she consider attending Harvard with her boyfriend, Lee's older brother Noah (Jacob Elordi)?

In the meantime, Lee's mother (Molly Ringwald) decides to sell the family beach house, so Elle, Noah and Lee get to spend the summer there to tidy it up before it sells. While going through their childhood belongings, Elle finds the Beach Bucket List she and Lee came up with years earlier, and they decide to try to do everything on the list, from sky diving to pie contests. Unfortunately, that gets in the way of her time with Noah.