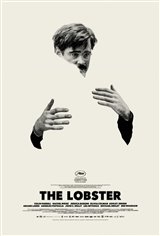 In a dystopian future where individuals are not allowed to be without a mate, David (Colin Farrell) has just been left by his wife. As a result, he must report to a secluded hotel which is home to other single residents and search for a new partner there. If he fails to find a match within forty-five days, he will be transformed into an animal, a lobster in his case, and released into the wild.

At first, David tries to abide by the rules but he soon becomes appalled by the ordeal and flees into the woods. Apparently he's not the first to escape. There he meets up with a band of rebellious runaways and is attracted to a fellow outcast known as the "Short-Sighted Woman" (Rachel Weisz).