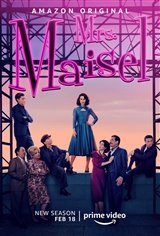 Miriam (Midge) Weissman (Rachel Brosnahan) and Joel Maisel (Michael Zegen) get married and have two children in 1950s New York City. When Joel decides to try his hand at standup comedy, Midge fully supports him, getting him earlier showtimes by bringing samples of her cooking to the bar manager.

However, as it turns out, not only is Joel not very funny, Midge discovers he's stealing his material from famous comics. Not only that, but he's cheating on her and walks out the door. In shock, Midge goes to the club and gets up on stage, giving an impromptu about what has just happened. She gets more laughs in a few minutes than Joel did over the course of several nights.

Club worker Susie Myerson (Alex Borstein) convinces Midge she should become a comedian and offers to be her manager.