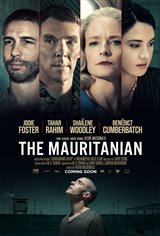 Mohamedou Ould Slahi (Tahar Rahim) has been held for years in prison at Guantanamo Bay Prison Camp by the U.S. Government without a single charge or the possibility of a trial, on suspicion that he was involved in the attacks that took place in America on 9/11.

Defense attorney Nancy Hollander (Jodie Foster) and her associate Teri Duncan (Shailene Woodley) decide to take on his case, even though Slahi, who has lost all hope of ever being free, is less than cooperative at first, for fear he'll be further tortured. Together they face countless obstacles in a desperate pursuit for justice. They run into opposition at first from formidable military prosecutor, Lieutenant Colonel Stuart Couch (Benedict Cumberbatch), but as he uncovers evidence, he begins to believe there has been a shocking and far reaching conspiracy to detain innocent men.