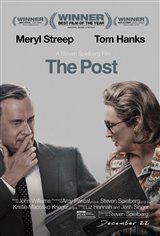 Based on true events, The Post documents a time when The Washington Post publisher Kay Graham (Meryl Streep) and her driven editor, Ben Bradlee (Tom Hanks) worked to expose the government's true reason for involving itself in the Vietnam War, which was explained via the controversial Pentagon Papers.

Kay and Ben's work highlights that journalists are often at odds with some of the highest officials in government, especially when it's learned that four U.S. presidential administrations (Truman, Eisenhower, Kennedy, and Johnson) misled the American public over why the U.S. was really in Vietnam.