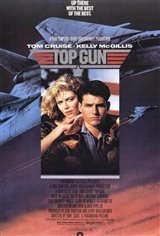 Tom Cruise stars as Maverick, a talented training pilot in an elite U.S. school for fighter pilots. When he stumbles upon some MiG's over the Persian Gulf, and his wingman panics, Maverick cleverly talks him through the situation to safety. Consequently, he is moved up in rank and sent to the Top Gun Naval Flying School. There he has several conflicts with other students while trying to live up to his deceased father's reputation. Unable to cope with the death of his best friend, and fellow pilot, Goose (Anthony Edwards), Maverick contemplates dropping out, but follows through with his dream and ultimately becomes one of the "best of the best."