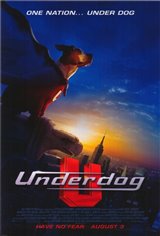 Underdog’s mysterious origins begin in the wake of an accident in the high-tech lab of the maniacal scientist Dr. Simon Barsinister (Peter Dinklage). Suddenly, an ordinary, down-and-out young Beagle named Shoeshine finds himself with extraordinary powers, not to mention the unexpected ability to turn his bark into real speech.

When a sinister plot by Barsinister and his overgrown henchman Cad (Patrick Warburton), threatens to destroy Capitol City, only Underdog can save the day.