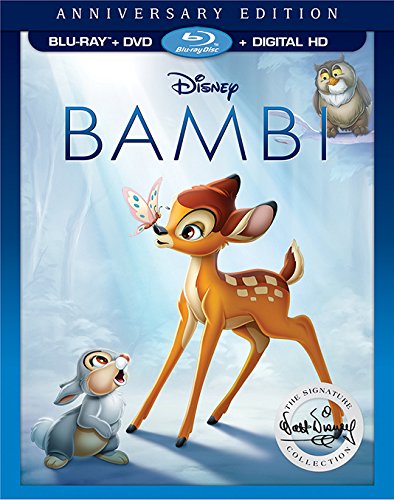 The animated 1942 movie Bambi is such a classic that it’s often referenced, especially when talking about advances in animation. Everyone knows characters such as Bambi, Thumper and Flower.

A Bambi picture book was re-released when I was a kid and I remember loving those characters on the page, but I don’t remember ever actually seeing the movie. When I recently watched the movie on Blu-ray, it was a totally new experience.

It’s a sweeter, gentler movie than I thought it would be. So much has been made of Bambi’s mother being shot by hunters, but it happens off screen and Bambi is immediately taken care of by his father. There is a forest fire, started by careless hunters, but the animals are shown swimming to an island and when the forest grows back, we see them all living happy lives.

However, it’s the story when Bambi is small that’s so endearing. We see him as a newborn, with the rest of the forest animals thrilled by the presence of the little “prince.” Thumper, an adorable chubby-cheeked little bunny with a huge personality, immediately becomes his friend and teaches him all about the forest and the other animals.

Bambi, who’s just learning words, mistakenly calls a skunk “Flower” when the young skunk pops his head up from a patch of wildflowers. Thumper laughs and explains the skunk is not a flower, but the skunk is delighted, saying Bambi can call him “Flower,” and from then on, that’s his name.

They have adventures in the woods and in the winter, Bambi learns how to glide on ice (but never as efficiently as Thumper). The animation at the time was miles ahead of anything that had ever been done before, thanks to the use of the new “multiplane camera.” The artists would paint the background forest in oil on sheets of glass and move them slightly for each shot, giving the perception that the forest had depth and wasn’t two dimensional, as in previous animated movies (or cartoons, as Walt Disney refers to them in one bonus feature).

Disney had a “School of Self Improvement” for artists. He was constantly helping them improve their technique and for Bambi, he brought real fawns and other animals into the studio so they could get every detail right. When he realized that wild animals behaved differently than those born in captivity, he sent camera operators out to capture them on film and played the footage for the artists.

They made models of the antlers so they could capture them correctly at every angle. Bambi (1942) came after Snow White and the Seven Dwarfs (1937), Pinocchio (1940) and Fantasia (1940), and everything learned from making those movies, and from making an experimental 1937 short called The Old Mill (included in the bonus features), was used to make Bambi that much better.

Other bonus features include Bambi‘s original theatrical trailer, a deleted song “Twitterpated” and Bambi Fawn Facts – wildlife facts about the animals seen in the film. There are many more bonus features, which make this release worth every cent, because you get footage of Walt Disney explaining how the multiplane camera works, a radio interview (with scenes of Disney skating with his kids), a look at the animation library and much more.

Studio Stories: Bambi – 1956 recording of Walt Disney’s voice as he talks about the changes made from the book to the movie and laughs about how his daughter held him accountable for not changing the part about Bambi’s mother, as we see scenes from the movie and home movies of Disney with his family.

Deleted Scenes – Introductions by Disney story artist Floyd Norman, who worked with Walt Disney. We’re shown rough drawings of scenes that didn’t make it into the movie, as actors perform the dialogue (not the actors who provided the final voices).

Oswald the Lucky Rabbit in Africa Before Dark – a long-lost Oswald short that was made by Disney for Warner Bros.

The Bambi Effect – a look at what makes Disney animated films so special, and how Bambi was the beginning of a new way of shooting animation and how it set the stage for future films. We also take a look at women animators who have worked for Disney.

The Old Mill – animated 1937 short that was essentially a test for effects used in Bambi, featuring some of the minor characters living in an old windmill.

Classic Deleted Scenes – Disney historians Charles Solomon and Paula Sigman offer three scenes that didn’t make it into the final cut of Bambi, including one titled “Bambi Gets Stuck on a Reed.”

The Making of Bambi: A Prince is Born – a look at various aspects of the movie, including interviews with three actors who provided the voices for Bambi (Donald R. Dunagan), Thumper (Peter Behn) and Faline (Cammie King Conlon, who also played the daughter of Scarlett O’Hara and Rhett Butler in Gone with the Wind) when they were children. It’s surprising to note that there are no credits following the movie, so the actors were all uncredited at the time.

Inside the Disney Archives – a look at the classic artwork kept in the Animation Research Library.

Have you seen Bambi? Make sure to rate/review it by clicking here and tell us below when you first saw Bambi!