Celebrity Gossip > Charlize Theron: Sean Penn is the love of my life

Charlize Theron: Sean Penn is the love of my life 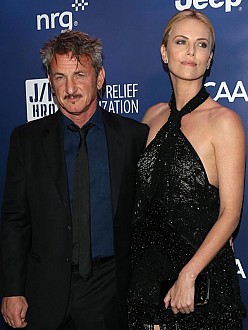 Charlize Theron says Sean Penn is the love of her life. The 39-year-old actress has been dating the Gunman star – who was previously married to Madonna and House of Cards actress Robin Wright – since early 2014 and has confessed she thinks he is her soulmate.

Speaking about working with him on the upcoming movie The Last Face, she said: ”Putting aside that he’s my partner, he’s the love of my life; for the first time, I felt that my work was really bleeding into my life and that made it hard.”

The Mad Max: Fury Road star admitted it was difficult having to put their relationship to one side in order to benefit the film but went on to suggest that she would choose Sean, 54, over her career.

Meanwhile, Charlize – who has a three-year-old adopted son named Jackson – recently revealed she wants to have a child with her fiance, who has adult children Dylan and Hopper from his marriage to Robin. Asked if she would like to have another child, she said previously: ”Yes. I always wanted to have children.”