Features > Get wild with The Jungle Book – Blu-ray review

Get wild with The Jungle Book – Blu-ray review 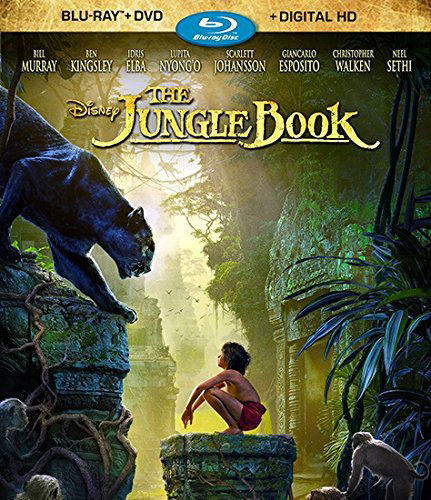 When I first watched the 1967 animated movie The Jungle Book on VHS as a child, I had to imagine how everything would look in real life. Decades later, The Jungle Book has once again been re-imagined into a live-action movie — but this time, you’ll feel as if though the animals and jungle are actually coming to to life.

The film starts with our protagonist Mowgli (Neel Sethi), who as a baby, was found in an Indian jungle by a black panther named Bagheera (Ben Kingsley). He is taken in and raised by Raksha the wolf (Lupita Nyong’o), along with her pack led by Akela (Giancarlo Esposito), and taught the ways of the wolves. However, he is discouraged in using human tricks and tools that he uses to catch up to his wolf siblings.

One day, the animals of the jungle gather at a watering hole, only to be interrupted by the fearsome tiger Shere Khan (Idris Elba). Despite a truce the animals have agreed upon that allows them to freely drink at the area during a drought, Shere Khan breaks it after detecting Mowgli’s scent. Resentful of humans after a man scarred his face, he warns them that he will kill Mowgli once the drought ends. Mowgli decides to leave the pack for their safety, and heads for a nearby man village with Bagheera.

On the way, the two get separated after an ambush by Shere Khan, and Mowgli runs into a hungry python named Kaa (Scarlett Johansson), but is saved by a lazy — yet friendly — bear named Baloo (Bill Murray).

The film is a little bit darker version of the tale than the animated one, and includes more details about Mowgli’s past, but is still family-friendly enough for kids to watch. Viewers of the classic Disney movie with feel nostalgic listening to memorable songs such as “The Bare Necessities,” “I Wan’na Be Like You” and Kaa’s “Trust in Me.”

The computer-generated imagery is incredible, showing us just how beautiful the jungle can really be. It’s amazing that the entire movie was almost completely CGI, with the only actual main human role being child actor Neel Sethi. For acting with props and CGI instead of other actors, Neel did an impressive job, and I’d love to see him in more upcoming films. Not to say that the voice acting wasn’t great as well.

Kaa, originally male in the classic Disney movie, is now voiced by by the talented Scarlett Johansson. Bill Murray, Ben Kingsley, Idris Elba, Christopher Walken and Lupiyta Nyong’o were all memorable as well, embodying the voices of the photo-real animals. I definitely recommend re-living your childhood with the new Jungle Book, or to introduce your children to its world. They’ll love it.

Bonus features include The Jungle Book Reimagined, which goes into detail on how filmmakers reenvisioned the original tale into this movie; I Am Mowgli, which tells you about the interesting journey of Neel Sethi, King Louie’s Temple: Layer by Layer, which gives you a look at how the “I Wan’na Be Like You” sequence was made, and Audio Commentary with the film’s director, Jon Favreau. ~Natalia Makarski