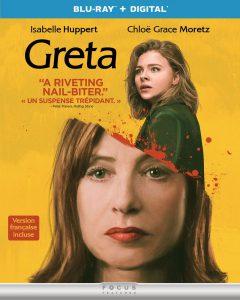 With Greta, writer and director Neil Jordan presents an interesting film about loneliness, and frames it between the dichotomy of a young and naive Frances McCullen (Chloë Grace Moretz) and the manipulative and controlling Greta (Isabelle Huppert). The film begins with Frances on her way home from work, when she finds a lost handbag on the subway and takes it, with the intention of returning it to its owner.

After contacting the owner, she heads to her home and meets Greta, who invites her in for tea as thanks for her kind gesture. The two share a short conversation and after Frances leaves, she thinks that’s the end of it — until Greta convinces her to help her pick out a dog to adopt the next day. From there, a friendship begins to bloom between the two women as each finds a sense of kinship within the other. Frances has lost her mother, while Greta’s daughter has moved overseas.

However, this friendship makes Frances’ friend and roommate Erica (Maika Monroe) uneasy, as she finds it a little unhealthy for Frances to befriend an older woman, particularly when she sees it as Frances looking for a surrogate mother. The situation is made worse when Frances discovers a cabinet filled with identical bags to the one she returned, revealing that Greta intentionally leaves them behind, in order to lure a good samaritan. With this revelation Frances breaks off their friendship, which begins to unravel Greta’s true nature as she becomes increasingly unhinged and begins to stalk Frances.

Much like its titular character, Greta is a film of two faces. On the surface, the film bears the guise of a typical suspense thriller as the curtain is pulled back on Greta to reveal a monster underneath. However, underneath it is an unexpected look at the loneliness felt by two women and how each fills a hole in the other’s heart. In the first third of the film, the friendship between Frances and Greta is genuinely sweet as we learn about the losses each character has dealt with.

When it’s revealed that Greta is in fact a manipulator, the film begins to suffer. The twist itself isn’t detrimental to the film and it does add a sense of tension; however, director Neil Jordan plays up this reveal rather blandly. It’s a shame because the energy of the film doesn’t quite match the eclectic and eccentric performance by Isabelle Huppert, who is fantastic as Greta. The way in which she plays Greta’s peculiarities stands out because it highly contrasts the straightforward direction of the movie. If the film had veered more towards Huppert’s performance and played up the horror aspect, Greta could have been one of the year’s more memorable movies.

Instead it settles for being a by-the-numbers thriller with three solid female performances. Chloë Grace Moretz is fairly solid as Frances, although there are a number of moments where her naiveté become increasingly frustrating for an audience member. However, a nice foil for her is Maika Monroe, who works as one of the more reasonable and sound-of-mind movie characters in recent memory. She perfectly balances out Moretz’ Frances and brings energy to the screen every second she’s on it.

Though Greta is a case of missed opportunities with its titular character and villain, it’s not without merit and entertainment. Isabelle Huppert’s performance is the biggest draw for this film and deservedly so. There are some genuinely touching moments between her and Chloë Grace Moretz, followed by unnerving scenes of tension. Rather than leaning in one direction or the other, it’s Jordan’s aim to strike a balance that ends up working against the film. All told though, Greta is still worth a watch. ~Paolo Maquiraya

Greta: Enemies & Friends – In this featurette, director Neil Jordan and his female cast of Chloë Grace Moretz, Isabelle Huppert and Maika Monroe discuss the film and the characters they play, and how a story featuring three women in the leads played into their interest in the project.