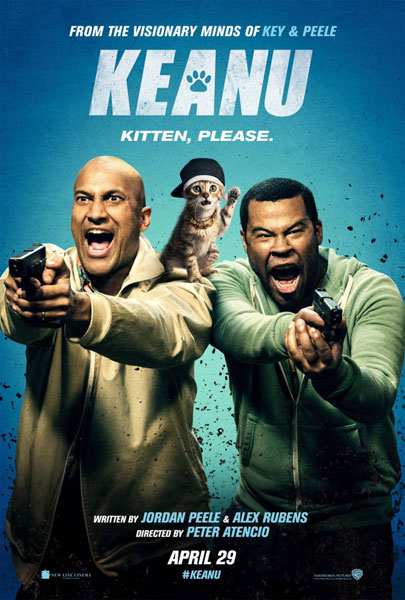 Don’t panic, Mother’s Day is most definitely next weekend. Luckily, this weekend we’ve got the quintessential Garry Marshall comedy Mother’s Day to give you a head start on how to get this very important holiday just right. But it’s not just mama’s boys (and girls) we’ve got covered this end-of-April weekend, we’ve got an assortment of flicks for all types — cat lovers (Keanu), gamers (Ratchet & Clank), stargazers (A Beautiful Planet), horror fans (Green Room) and good old-fashioned thrill seekers (Precious Cargo). ~Shelby Morton

Narrated by Jennifer Lawrence, A Beautiful Planet offers an exploration of Earth as seen from outer space, exclusively in IMAX and IMAX 3D theaters across Canada. The astronauts in the film show us unique and beautiful views of the world, including colorful night views from the International Space Station, giving us an understanding of how the natural world works and expanding what human beings can do. Click here for showtimes.
Trailer: A Beautiful Planet

Available in select cities today, Green Room follows a down-on-their-luck punk band (Anton Yelchin, Alia Shawkat, Callum Turner, Joe Cole) as they perform a last-minute gig in order to make enough money to buy gas to get home to Virginia. They take the stage to face an audience of neo-Nazi skinheads, and start the set with a cover of the Dead Kennedys’ “Nazi Punks F*** Off.” Although their performance seems to go surprisingly well, when they return backstage, they find something incredibly gruesome and are confronted by the club owner and some white supremacists. Click here for showtimes.
Trailer: Green Room

After a botched heist, Eddie (Bruce Willis), a murderous crime boss, hunts down the seductive thief Karen (Claire Forlani) who failed him in the action thriller Precious Cargo, out in Toronto and Montreal today. In order to win back Eddie’s trust, Karen recruits her ex-lover and premier thief Jack (Mark-Paul Gosselaar) to steal a cargo of rare precious gems. But when the job goes down, allegiances are betrayed and lines are crossed as Jack, Karen, and Eddie face off in a fateful showdown. Click here for showtimes.
Trailer: Precious Cargo