Features > New on DVD and Blu-ray today: Joker and Judy 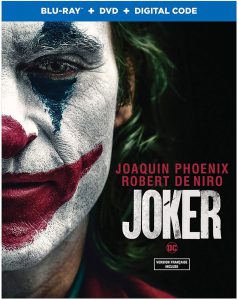 There are two very different personalities coming to DVD and Blu-ray today — one based on a DC comic book character and one on the tragic life of an iconic performer. Both of the actors just won Golden Globes on Sunday night — Joaquin Phoenix received Best Actor in a Motion Picture – Drama for Joker and Renée Zellweger took home Best Actress in a Motion Picture – Drama for Judy. Check out the films and trailers below!

Joker – Arthur Fleck (Joaquin Phoenix) lives with his frail mother and devotes himself to caring for her. During the day, he works as a clown, but he dreams of being a stand-up comic. Unfortunately, others don’t relate to what he finds funny and he’s often bullied. Distraught by the cruelty he experiences, Arthur makes one bad decision after another, cementing his destiny and setting off a chain reaction of escalating events.

Judy – Legendary performer Judy Garland (Renée Zellweger) arrives in London in 1968 to perform a series of sold-out concerts at the Talk of the Town. As she prepares for the show, she battles with management, charms musicians and reminisces with friends and adoring fans.