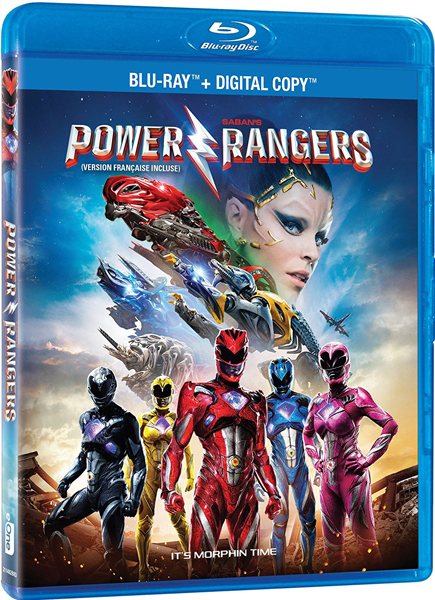 I wasn’t sure what to expect from this new Power Rangers movie, never having seen the ’90s TV series. I was pleasantly surprised to find I really enjoyed it.

As I was watching it, I found myself comparing it to one of my favorite teen movies set in high school — The Breakfast Club — so when in the bonus features, several people, including director Dean Israelite, spoke about that movie and how it inspired aspects of this movie, I realized why.

The five teens include popular girl Kimberly (Naomi Scott), star athlete Jason (Dacre Montgomery) and geeky kid Billy (RJ Cyler); all of whom have been sent to weekend detention for various misdeeds. They meet up with Trini (Becky G) — a girl with family problems and daredevil Zack (Ludi Lin). They’re not exactly the characters from The Breakfast Club, but there were definite similarities.

The movie focuses most on Jason, whom we first see leading a bull into a locker room at night. He and his friends have broken into a rival school to play a harmless prank, but things go wrong when the police arrive.

As Jason’s friends go one way, he goes the other and speeds off in a car with the police chasing him. When he crashes, he’s not only injured, but is charged with evading police and assigned weekly detentions. It ends his football career and puts him in a bad position with his father, who had lined up scouts to see Jason, envisioning him going on to attain a scholarship.

In detention, Jason spots Kimberly, a once-popular girl who made a decision that turned her friends against her. When Jason arrives in the basement room for his first detention, a bully is picking on science geek Billy. Jason handles the bully in a quietly effective and somewhat humorous turn. Encouraged by Jason’s actions, Billy asks for his help with something after school. Jason agrees when Billy tells him he’ll get the loan of a car in exchange.

When Billy directs Jason to drive to a mine, past signs that warn people to keep out, Jason begins to have second thoughts. He decides to leave, but stops when he spots Kimberly diving into the quarry. Soon after, there’s an explosion, and not only do they run to the scene, where they find Billy and two other teens — Trini and Zack — who’ve come to check out what’s happened. They discover shiny, different colored coins in a cave and each of them takes one, but when alarms go off at the mine, the kids make a run for it with security guards in pursuit. Jason, who has the most to lose, is desperate not to be caught again.

This movie may be about superheroes, but it’s first and foremost a teen drama. The lead actors play their roles as deeper, more complex characters in this origin story than Power Rangers fans are used to. All five leads are engaging and likable — Dacre has enormous charisma as Jason, while RJ Cyler, who made his film debut as the cooler-than-cool Earl in Me and Earl and the Dying Girl just two years ago, shows his range as geeky Billy. London-born Naomi Scott, who may be the most experienced of the five, exudes warmth and vulnerability as Kimberly, while Ludi Lin, who has starred in major Chinese releases, was quirky and bold as Zack, but also displayed warmth in his scenes with his ill mother. Singer Becky G, making her movie debut, brought the required toughness to Trini, who, in a group of outcasts, is really an outsider.

Bill Hader and Bryan Cranston lend their voices to two of the characters and Hader in particular adds a touch of humor to his character and to the movie.

The only thing I found disappointing was with the villain, Rita Repulsa. Played by Elizabeth Banks, who’s not only beautiful but very talented, Rita seemed a bit hokey. Rita obviously is a carryover from the original TV series, and she just didn’t seem to fit into this realistic depiction of these five superheros as real people with emotions, struggles and problems. A completely different, more scary and more realistic villain would have been a better fit for the movie.

Other than that, I really enjoyed the film, which I think would appeal to just about everyone — kids, teens and adults, especially if you enjoy movies set in high school.

There are hours of special features on the home release, which is available in 4K Ultra HD, Blu-ray, Digital and DVD, including deleted/alternate/extended scenes; outtakes; audio commentary with the director and writer; and the theatrical trailer with audio commentary from the director. Also, The Power of the Present featurette has nine different sections:

Building the Team: One of the actors refers to the movie as The Breakfast Club meets Guardians of the Galaxy. We also hear from Jason David Frank and Amy Jo Johnson, two of the actors from the 1990s series, who play cameos in this movie.

Beyond the Rangers focuses on three of the adult actors in the film: Elizabeth Banks, Bill Hader and Bryan Cranston.

Suiting Up takes a look at the new suits designed for this movie and how they’re different from the originals.

Rangers, Welcome to Training: In this featurette, we see the cast going through physical training for the stunts they need to do for the film, and how each Ranger has a different fighting style.

Rangers in the Wild: A behind-the-scenes look at filming in Vancouver.

It’s Morphin’ Time: A look at the CGI involved in the film. We see the actors working with a combination of green screen and actual sets.

Power Ballad: Music and Sound: More behind-the-scenes footage and interviews as well as a look at the music and sounds of the movie.

This is Your Destiny: The Power Rangers premiere, where Haim Saban, director Dean Israelite and the stars are interviewed on the red carpet.

We have five Power Ranger Blu-rays and T-shirts to give away, courtesy of Entertainment One. If you would like to be entered to win one, tell us which Power Ranger is your favorite and why. Also tell us your size – the shirts are Yellow (Youth Large), Red (2 – both Adult Medium), Black (Adult Large), and Pink (Adult Large).

Congratulations to our winners: Adil Viriji, Adam Kohn, Arturo Operario, Andrew Siwik and Lloyd Falconer! Your T-shirts and Blu-rays have been sent out.