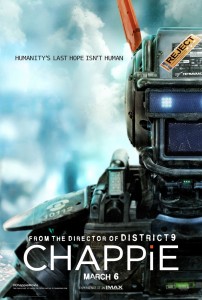 The science fiction movie Chappie, about a reprogrammed robot with the ability to think and feel, stole the show in its debut at the weekend box office. The film, which marks Neill Blomkamp‘s third directorial feature, earned $13.3 million. The futuristic film has a 3.4 star rating with Tribute readers.

Shifting one spot down to number two was the crime comedy Focus. This time Nicky and Jess managed to pocket $10 million. The film has also dropped to a 3.7 star rating with Tribute readers.

After three weeks at number two, Kingsman: The Secret Service dropped to number four. The action thriller, which currently has a 3.6 star rating with Tribute readers, earned $7.8 million.

Another drop at this weekend’s box office was The SpongeBob Movie: Sponge Out of Water. At number five, the family film earned $7 million. Tribute readers have rated it 2.9 stars. ~Sandra D. Sukraj