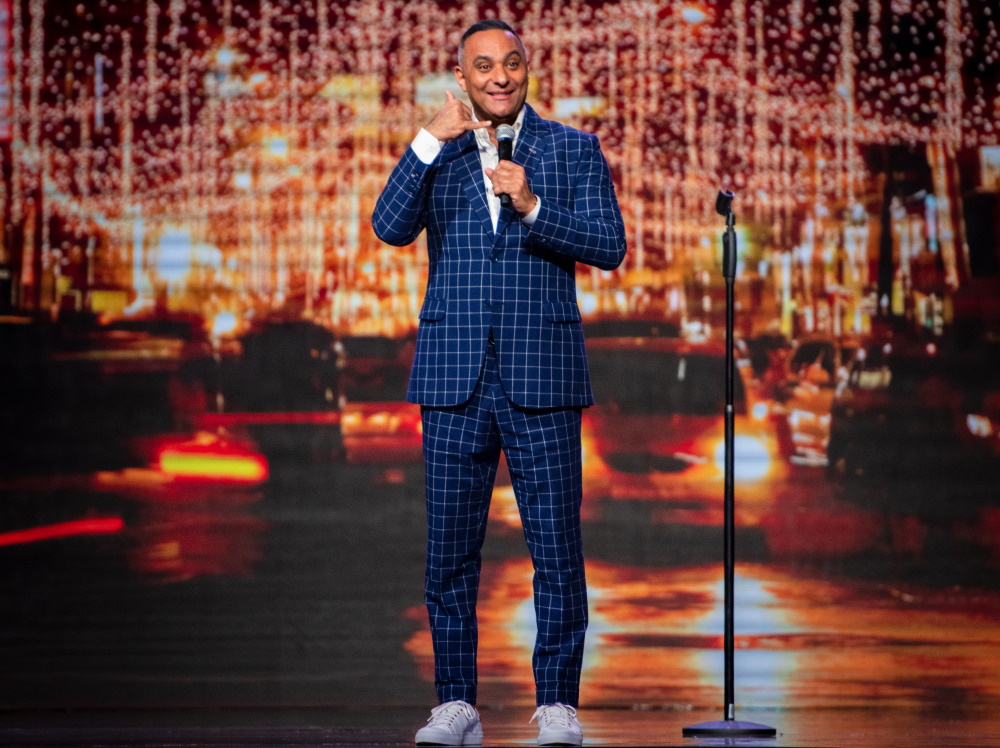 Russell Peters. That’s a household name, especially if you either grew up in Canada or even more, if you’re South Asian. Russell pokes fun, endearingly, at a range of cultures, races, ethnicities and especially, his Indian heritage. His gift of mimicry allows him to take jabs at everyone, drawing in arenas full of diverse fans around the world.

For the last two years, Russell was on his Deported World Tour, which ended last year. He decided to film his act in Mumbai for his Amazon Prime Video special, titled Deported. The act will mark his 31st year in stand-up and according to Russell, this special is a lot more personal and self-deprecating than previous ones, in the funniest way possible, of course.

After three decades as a globally successful comedian, there’s nothing the Canadian-born comedian holds back. No sooner do we sit down to talk about Deported than he’s cracking jokes and I’m laughing my heart out. He’s already trying to figure out my last name and background before asking me to relay his messages to my mom (who’s a big fan). There’s a reason why Rolling Stone magazine named him one of the 50 Best Stand-Up Comics of All Time. ~Marriska Fernandes

I read an article recently and the first line said: “Russell Peters is back—to entertain, offend, or both, depending on where you stand.” I thought, “What does Russell think of this when he reads this?”
Russell is just here to make you laugh. That’s all I care about. I just want to see a smile on your face. A comedian’s job is to make you laugh. If you feel anything else other than laughter, then that’s on you (laughs).

Why the title Deported and what’s the significance of it?
If you look at the titles of my older specials, I was trying to keep it in certain themes. There was Outsourced, there was the Red, White and Brown Tour, and there was the Green Card Tour and then we took a break with Notorious and Almost Famous, so I said, “Let’s go back [to the theme] and do Deported.” Because I got my green card 10 years ago and then my green card expires this year so… could I be or could I not be deported?

You’ve said that Deported is personal and different from what you’ve done before — what made you decide to go in this direction?
You look at what I’ve done in the past and there’s no way I could have talked about what was happening in my life before because it hadn’t happened yet, so there’s only one way to keep it honest and no one can say, “Hey, that’s my joke!” I’m like, “It can’t be your joke because it’s my life.” I’m the only one living my life.

What was it like performing in Mumbai and why did you choose that city to shoot your special?
It was awesome. I always have a good time performing in India. Mumbai is one of my favorite cities in the world. Did you grow up there?

No, I grew up in Dubai before moving to Canada.
Oh, that’s what happened. Funny you said it, because Dubai is initially where I said to my brother that maybe we should shoot the special there. We then changed it to Mumbai because of the synergy there.

Do you change your sets based on the audience?
No, not really. You’ve got to stay true to yourself. You wrote the act. You’ve been doing it everywhere else in the world. I could do the same act in Europe where people don’t look like me and they dig it. When I do it in front of people that look like me, they’re going to dig it even more.

I heard that you don’t write your sets, so what’s your method?
No, I don’t physically write it. I get on stage and I’ll talk to the crowd for an hour and while I’m talking to the crowd, I know I have this and that, that I’m working on — I have these raw pieces and I’ll fit them into the crowd I’m talking to and I keep sculpting it as we go. I keep figuring out what the consisting behavior of the thing is.

You were one of the first Indian-origin comedians to make it big globally and now, many more have followed. How has the stand-up scene changed over the last decade?
I started in 1989 and there was nobody that looked like me when I started — I was the guy. I wasn’t trying to be the guy. It was all done unwittingly. I just wanted to be a comedian and I just happened to be a brown guy. I was a fan of comedy. You look at it from 1989 to now, you got a lot of rock star comics out there. Back when I started, there were not a lot of people doing that kind of thing. The time with Andrew Dice Clay was massive. He was the only one doing it at that level.

I read one of your interviews in which you said: “Comedians don’t see the world the same way a normal person does.” Please do explain.
Oh, we do not. Comedians look at everyone else as civilians. You guys are all civilians to us. We have a very dark way of looking at things. We’re not able to take a serious moment and go, “Oh, that’s so terrible.” At first, we’ll immediately be like you, “Oh my God,” and we’ll find something funny about whatever disaster happened. I’ll give you an example of how dark we can be. A comedian friend of ours, Brody Stevens, hung himself last year. They had a wake for his comic friends at the comedy store in Los Angeles. He was a beloved guy and everybody loved Brody. A bunch of Brody’s childhood friends came up and said all these nice heartfelt stories about Brody on stage. There were a lot of tears in the room and people were crying and were sad. And then Jeff Ross came on and goes, “What a sad event we’re here for and Brody’s childhood friends came up here. After hearing them speak, no wonder he f**king killed himself!” The entire room exploded with laughter because it’s kind of what we need at some point. You can’t just take all this pressure. You need something to release it. You’re the balloon and we’re the pin. Eventually we come and pop that balloon.

They say being a comic means a stream of criticism every day — how do you clap back at the trolls? How do you deal with criticism?
There’s always a stream of criticism. It bothers us obviously. But we can’t… I’m not that kind of guy. I can’t get into an argument with people that are faceless and nameless. I delete, report and block you. That’s what happens to you. You talk s**t to me online, then report, delete, block (laughs).

Dave Chappelle said that comedians are some of the most sensitive people on Earth. Do you feel the same?
We are. I agree because we are hyper-aware. We’re aware of everything going around us. We catch all the nuances that people do — tone, a look, body language. We pick up on everything people do around us. So we’re hypersensitive, in that regard. That doesn’t mean we sit around going, “Aw..” [Russell pretends to mope.] We’re just hypersensitive in term of being very aware.

I’ve noticed comedians are very different on stage or onscreen as opposed to their off-screen persona.
I’m an amplified version of me on stage. The guy on stage is definitely me — he’s just me on stage with a microphone.

Tom Hanks gave this incredible speech at the Golden Globes and one line really stuck with me: “You’re a dope if you don’t steal from everybody you have ever worked with.” So I’m stealing his line when I ask, who’s the person you learned the most from?
George Carlin told me very early on in my career, “Get on stage as much as possible. No matter where you are… even if it’s for two minutes at a time. If you’re at a bar and there’s a band playing and they take a break, go up to them and ask them, if you can do five minutes of stand-up in-between. Don’t worry about it if you kill or if you don’t do well. Get that experience in.” He said, “As a matter of fact, if you bomb, it’s probably better for you. It will teach you more than killing.” Killing feels better. Bombing teaches you more (laughs).

What’s your fondest reaction you got from a fan?
I had some really great fan moments — they do things that really touch my heart. I always get choked up when I talk about this one. There was this guy who was dying of cancer and he was a big fan. His family reached out so I said we should go see him. So we autographed T-shirts and posters and books and a bunch of stuff. We sent it to him, but he passed away before I could go see him. But then he asked to be buried in the T-shirt I sent him [chokes up] — see… every time!

Who would you credit for helping you shape your comedic voice?
Keith Robinson and Patrice O’Neal — two hilarious comics. Patrice passed away a few years ago. But back in 1996, they let me sleep on their couch in Woodbridge, New Jersey. They let me go and do spots with them in New York City. At the time, I brought a VHS tape of a comic special which aired on CBC in 1995. I was all excited about it and so proud of this special. They were like, “We want to see it.” So I put it on and it ended and I go, “What did you think?” and they go, “What the f**k was that?” and I thought they were kidding. I go, “You’re kidding, right?” and they go, “That was a piece of s**t! It’s terrible!” And they broke down what was terrible. It sucked because I was so happy about the special. But that really taught me a lot. They taught me to write from the inside. Don’t write what you think they want to hear. Write your voice. Once you start getting into your voice, nobody can take your voice away from you. That was the start of my change.

Thanks so much for the chat and wishing you all the best!
Thanks Marriska!

We chat with Joel Kinnaman and Mireille Enos, who star in the Amazon Prime Video series Hanna. They dish on their friendship and their on-screen dynamic. 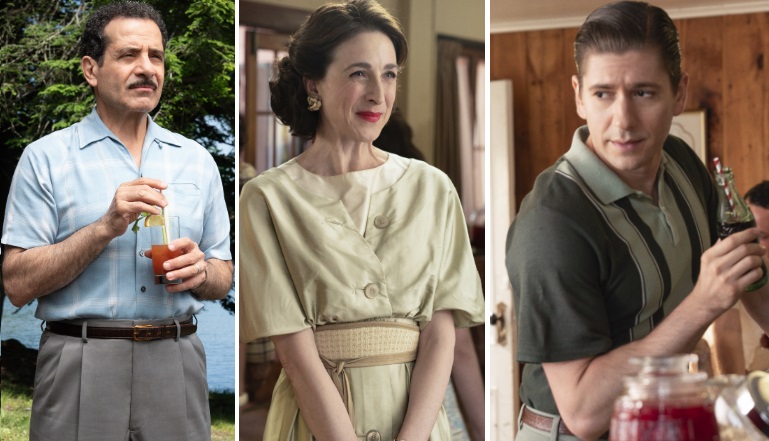 The Marvelous Mrs. Maisel cast on season two and more