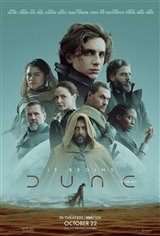 Paul Atreides (Timothée Chalamet) is a member of the royal family on his home planet. When he has vivid dreams of a girl (Zendaya) on the spice planet Arrakis, he begs soldier Duncan Idaho (Jason Momoa) to allow him to tag along on his mission to the dangerous planet. However, Duncan doesn't feel the boy is ready.

After Paul's father Leto (Oscar Isaac) makes a deal involving Arrakis, he and Paul, along with soldiers, travel to Arrakis. Leto wants to harvest the spice, while Paul wants to find the girl. But when outsiders who have been getting rich from the profits they've made selling the spice return, they try to exterminate everyone on the planet to keep the spice for themselves. Paul and his people have to unite with the natives in order to survive the oncoming doom.

Based on the bestselling novel of the same name by Frank Herbert.