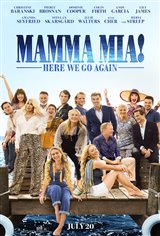 Three years after the events of the first film, when Sophie (Amanda Seyfried) discovers that she is pregnant, she feels terrified at the thought of having to raise a child. She reveals the news to her mother’s friends Rosie (Julie Walters) and Tanya (Christine Baranski), and to her three fathers, Bill (Stellan Skarsgård), Sam (Pierce Brosnan) and Harry (Colin Firth).

The group reminds her that her own mother, Donna (Meryl Streep) was faced with the same daunting situation thirty years before when she became pregnant with Sophie. They then reveal the story of when a young Donna (Lily James) came to meet and fall in love with three suitors during one fateful summer in Greece, filled with love, heartbreak, and lots of music.