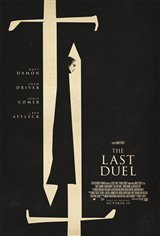 Against Marguerite's wishes, Jean decides to challenge Jacques to a duel to the death, even though he knows that if he loses, it will leave his wife in a precarious position.

Based on the book The Last Duel: A True Story of Trial by Combat in Medieval France by Eric Jager.