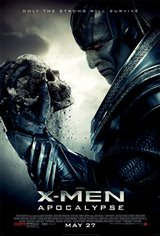 Ruling Egypt thousands of years ago, En Sabah Nur, also known as Apocalypse (Oscar Isaac), was the first mutant in existence. Betrayed by his worshippers, he was entombed, while his followers, the Four Horsemen, were destroyed. Centuries later, in 1983, he awakens to find the world is not as he left it. He believes mankind to be corrupt and weak, and seeks to destroy all humans and mutants in order to build anew.

He recruits a grieving Magneto (Michael Fassbender), who just lost his wife and child, as well as other wayward mutants to create this new world order. Charles Xavier, now Professor X (James McAvoy), and Raven (Jennifer Lawrence) must now lead a team of young X-Men to fight against Apocalypse and the inevitable destruction of the Earth.

Canadian Connection: Filmed in Montreal. Some actors in minor roles are Canadian.