Features > Beauty and the Beast now on Blu-ray and DVD 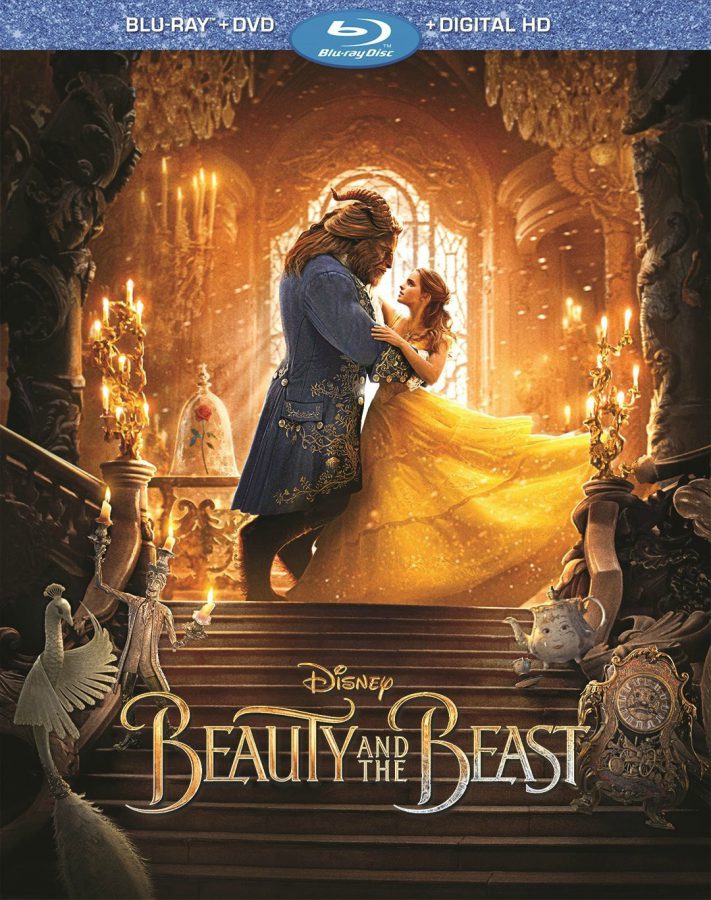 The live action Beauty and the Beast was a hit with audiences, earning over $500,000 million at the domestic box office, becoming the highest-grossing PG film of all time. It’s now available on digital, Blu-ray and DVD, with plenty of bonus extras.

To read a review of this film, click here. This article is going to focus on the bonus features, because there are so many amazing ones on this Blu-ray.

My favorite was the Table Read. It takes place on the set of Beauty and the Beast at Shepperton Studios in England, but it’s no ordinary table read. The dancers, singers and some of the stars of the movie had been working for weeks preparing dance numbers and songs to show them to the rest of the cast. Luke Evans performs the song “Gaston.”

He dances across tables with the dancers and a talented stand in for LeFou (Josh Gad, who played the character in the film, had a scheduling conflict that didn’t allow him to come earlier, but he’s there for the table read and does an outstanding job in the finished production of the song — of which we get glimpses as well).

In Making a Moment with Celine Dion, we see the Canadian singer reveal how difficult it was to make decisions when her manager/husband passed away, and says she wasn’t sure if she wanted to be part of this live-action adaptation. However, once she saw the completed film, and heard the new song they wanted her to sing, she knew she had to do it.

The Deleted Scenes are mostly from the battle scene at the end, and weren’t included for time constrictions and/or because they weren’t essential to the plot. They include Gaston Courts Belle, Bread and Jam for Agathe, Storming the Ice Gates, Lumière Torches LeFou, Monsieur Toilette, Cosgworth Rescues Lumière, Treacle the Lasses and LeFou and Monsieur Toilette Reunite.

In the featurette A Beauty of a Tale, Emma Watson reveals how and why she fell in love with the animated Beauty and the Beast when she was four. She also says there was much more to explore in the live action version and says the film is really four films in one — action, comedy, romance and musical. Josh Gad talks about how iconic the songs are, while Emma Thompson says the animated film was a tough act to follow. Composer Alan Menken and actor Ian McKellen talk about why Bill Condon was the perfect director for the movie and we go backstage at Shepperton Studios, where Luke Evans reveals that the sets had been worked on for months before the cast arrived.

We also learn that several of the cast members had stage musical backgrounds, including Luke Evans, Josh Gad and Ewan McGregor.

In Enchanted Performances, we find out that Dan Stevens, who plays the Beast, worked on training his singing voice for six months prior to filming, calling what he went through “musical theater camp.” Bill Condon says Emma Watson was their first and only choice for Belle, even though she had no musical theater experience.

In Revival of a Classic, we see animated scenes side-by-side with the live-action counterparts. Bill Condon says in the live version, he wanted to answer the questions that people may have had about the characters after seeing the animated movie. There are a number of additions to the characters to flesh them out. Belle is now an inventor herself, like her father; LeFou is given a conscience; and we get a look at the Prince’s childhood, before he became the Beast. We learn that there were lyrics written for the animated musical by original lyricist Howard Ashmore (1950 – 1991) that hadn’t been used, that were added to this version.

In Creating the Illusion, we find how the animated characters were made to look real with the over 1,700 visual effects used in the movie. We also find out there’s a process called Pre Vis shown to the actors so they get a feel for how the finished product will look. Dan Stevens is shown in his motion capture suit on stilts as he dances with Emma Watson.

Song Selection gives us a look at the songs as they appear in the film, with karaoke-style lyrics at the bottom of the screen.

There’s also an interesting story from Bill Condon in Extended Song: Days in the Sun, as he admits his original choice for the actress who played the Prince’s mother looked too much like Agathe — so much so that the audience was confused, forcing them to recast. They then changed it so that the young Prince had lines to sing and had to recast his part as well, so we get to see how the song “Days in the Sun” looked originally before the cast was changed.

The Women of Beauty and the Beast takes a look at several of the women who played key roles behind the camera.

From Song to Screen discusses the story behind each of several songs. For “Belle,” we learn how they got the look for the set from a real town in France, and how Belle’s blue dress was designed. “Be Our Guest” was the biggest challenge because Emma Watson had to act with nothing but a table with a few props on it. She calls it the most boring scene she’s ever had to film, which is surprising to learn because the end result is so magical. The scene took six months to plan; over one month to shoot (poor Emma!) and then 15 months for the CGI to be completed, while “Gaston” took five months in total.

There are also music videos, including the Beauty and the Beast video and the making of the video.

If you have seen Beauty and the Beast and would like to rate/review it, click here. ~Alexandra Heilbron


Beauty and the Beast Blu-Ray dvd