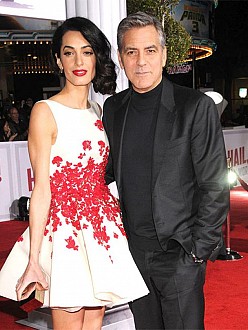 George and Amal Clooney “try not to go too long” without seeing each other.

The Hail, Caesar! star believes the secret to the pair’s relationship is never having “huge gaps” without seeing each other, even when their careers take them to opposite ends of the world.

Speaking about their relationship, he is quoted by the Daily Mirror newspaper as saying: “FaceTime – we will do that but mostly it is trying to not go too long without being apart, and you do the best you can. We spend an awful lot of time together. We don’t have huge gaps.

Meanwhile, George – who wed the human rights lawyer in September 2014 – previously revealed he feared putting out his hip when he got down on one knee to ask Amal for her hand in marriage.

He shared: “I got down on my knee and said, ‘I couldn’t imagine spending the rest of my life without you.’ And she kept looking at the ring and she was looking at me and she was like ‘Oh my God.’

“And we now know because there is a playlist, so we know how long it actually took, and it’s like 25 minutes, 25 minutes! Finally I literally said, ‘Look, I hope the answer’s yes, but I need an answer. I’m 52 and I could throw out my hip pretty soon.’ And she said, ‘Oh, yes’ and it worked out really well.”