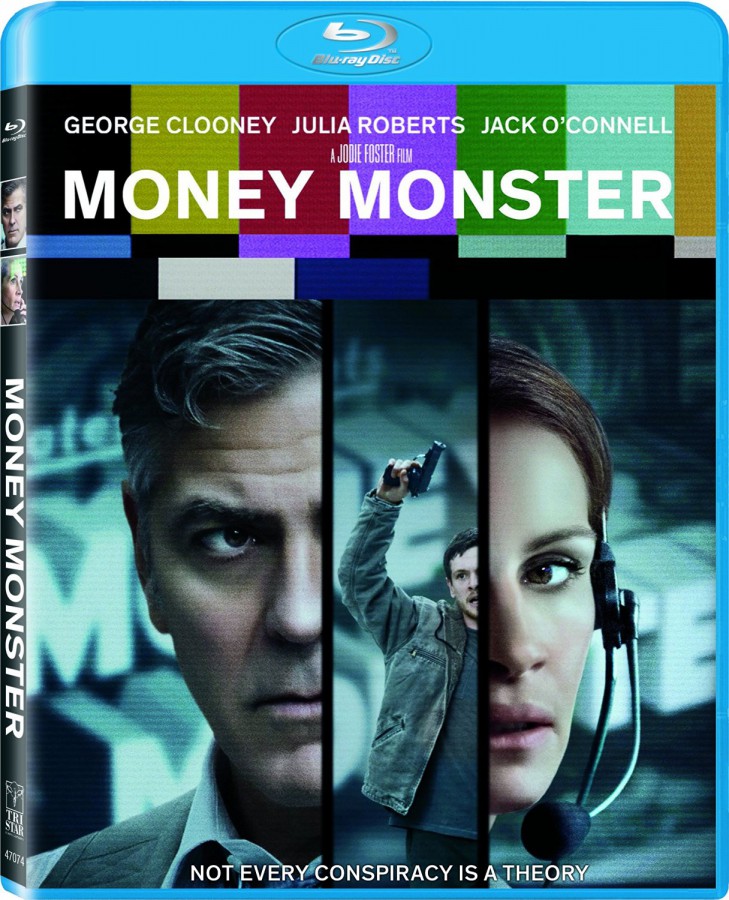 Money Monster has a pretty tricky premise, particularly because it’s set in post-9/11 New York City. I questioned how they could stretch out a one-man hostage takeover for an entire movie, and avoid any ridiculous or long-winded plot devices. But somehow, someway, this financial thriller managed to keep me on the edge of my seat almost all the way through.

Patty Fenn (Julia Roberts) is the show’s longtime director and a friend of Lee’s. After a company called IBIS Clear Capital’s stock plummets due to a “computer glitch,” millions of shareholders lose a lot of money — $800 million to be exact. Unfortunately for the Money Monster crew, IBIS also happens to be a stock that Lee enthusiastically endorsed to his viewers a month earlier.

One such viewer is Kyle (Jack O’Connell), a laborer who lost all of his money in the crash, who decides to take matters into his own hands and hold Money Monster‘s set hostage — completely by himself, with only a gun and a bomb strapped to Lee’s chest as leverage. Forcing Patty to keep the cameras rolling, Kyle is determined to get revenge for his misfortune, and to figure out just how hundreds of millions of dollars went missing.

Although I genuinely enjoyed this movie, there were a few moments when Money Monster’s premise failed it a bit — for a flick that’s only about an hour and a half long, it did feel a little drawn out at times. It’s difficult to tell a story with the same few characters held predominately in the same location for an hour or so, and still hold the audience’s attention throughout. Luckily, it boasts an extraordinarily talented cast who helped keep things interesting.

First, there’s George Clooney, who plays the stereotypical smarmy and narcissistic TV host perfectly. Although I could’ve done without his dancing (yes, George Clooney dances) and a few of his more cheesy antics, he still managed to make a wholly unlikable character into one you find yourself rooting for.

And then there’s Julia as Lee’s director/babysitter/mother. Even though you’re hyper-aware that you’re watching The Julia Roberts, there’s always something so grounded and relaxed about her onscreen presence. Even in the most precarious of situations, Patty Fenn is a real source of strength and fortitude, and that’s due to Julia’s prowess as an actress.

Despite George and Julia’s megawatt star power, the real standout of the movie is the lesser-known Jack O’Connell. As Kyle, he is a hopeless, desperate, angry, and deeply sad man who saw no other option than to hijack a TV show to get his point across. Jack added real depth and humanity to a character who could’ve just easily been labelled a madman. He became the voice for the regular folk, those who’ve placed all their trust into a corrupt institution and have had that trust broken. He also became the face of a real issue hitting lower-to-middle-class Americans today — wealth disparity. Also, for an Englishman, he pulled off a decent Brooklyn accent.

Speaking of non-Americans, I must also point out the striking Caitriona Balfe, who plays IBIS’ Chief Communications Officer, and with whom I have a mildly unhealthy obsession (thanks, Outlander). She just naturally commands the screen, and I’m so glad she’s finally getting the opportunities she deserves to show off her incredible (and underexposed) talent.

So, as I was saying earlier, this movie could’ve easily turned downright silly. It’s initially hard to wrap your head around how one man could take an entire TV station hostage in an era when even elementary schools have metal detectors, but once you let go of the obvious lapses in safety precautions, Money Monster provides a legitimately thrilling ride. And any movie that seeks to point out the social and economic inequalities in our society is a movie I can fully get behind. I give it a 7/10. ~Shelby Morton

Special Features: Deleted Scenes, George Clooney: The Money Man, Inside the Pressure Cooker, Analysis of a Scene: The Showdown, and Dan the Automator (feat. Del the Funky Homosapien) “What Makes the World Go ‘Round (MONEY!)” Music Video.

Feel free to rate and write your own review of Money Monster here.