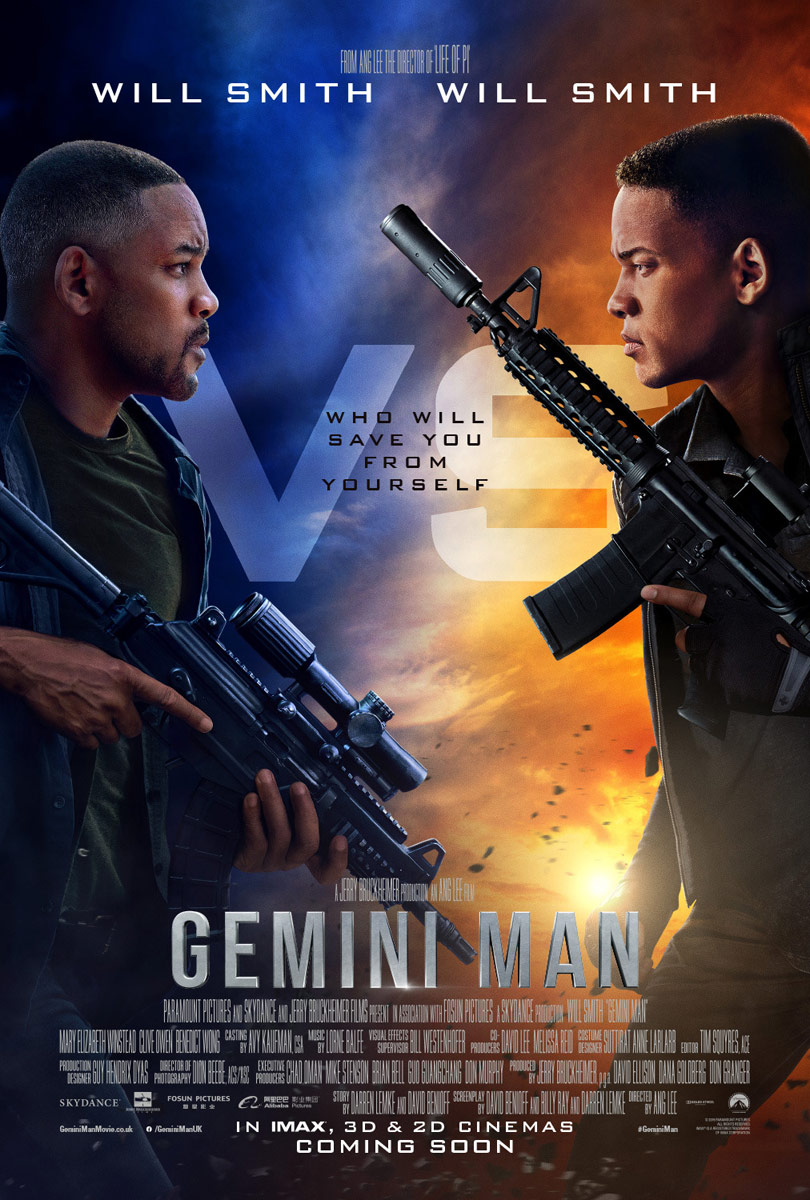 Gemini Man, the highly anticipated new movie from Oscar-winning director Ang Lee, hits theaters nationwide, as does the animated The Addams Family and the comedy Jexi. Check them out below, plus four limited releases opening in select cities. ~Alexandra Heilbron

Gemini Man – After a hit has him questioning the target he was given, elite assassin Henry Brogan (Will Smith) decides it’s time to retire. However, when Henry starts asking questions about the hit and discovers the truth, the higher ups decide to put a stop to him, using Junior, a clone made using Henry’s DNA, whom they send out on a mission to kill him. Click here for showtimes.
Trailer: Gemini Man

The Addams Family – In this animated film based on the macabre and dark cartoons by Charles Addams, loving parents Morticia (Charlize Theron) and Gomez Addams (Oscar Isaac) raise their daughter, Wednesday (Chloë Grace Moretz) and their son, Pugsley (Finn Wolfhard), in an unorthodox way, complete with bombs, a creepy butler named Lurch, and their eccentric Uncle Fester (Nick Kroll), who lives with them. Click here for showtimes.
Trailer: The Addams Family

Jexi – Addicted to his phone, Phil (Adam Devine) has no friends and his love life is non-existent. When he’s forced to upgrade his phone, the new model comes with Jexi (Rose Byrne) — an A.I. life coach, virtual assistant and cheerleader. With her help, Phil begins to get a real life. But as he becomes less dependent on his phone, Jexi morphs into a tech nightmare who’s determined to keep Phil all to herself. Click here for showtimes.
Trailer: Jexi

Dolemite is My Name – Struggling singer/comedian Rudy Ray Moore (Eddie Murphy) works in a record store in early-1970s Hollywood. Every type of hustler populates the neighborhood, most with a wicked repertoire of obscene insults. Moore begins picking up their patter as inspiration and creates a stage character, Dolemite the pimp. He soon rockets from clerk to ghetto superstar and before long, he’s starring in movies. Opens today in Toronto/Montreal and on Oct. 12 in Vancouver before debuting on Netflix Oct. 25. Click here for showtimes.
Trailer: Dolemite is My Name

Lucy in the Sky – While on a mission in space, astronaut Lucy Cola (Natalie Portman) begins to lose touch with reality. When she returns to Earth, she has trouble interacting with others. Despite having a supportive husband (Dan Stevens), Lucy has an affair with another astronaut, Mark Goodwin (Jon Hamm). When Mark dumps her, Lucy decides to kidnap new recruit Erin Eccles (Zazie Beetz), Mark’s new lover. Click here for showtimes.
Trailer: Lucy in the Sky