Jamie Dornan didn’t do well with girls at school

Jamie Dornan was no good with girls at school.The 32-year-old actor has confessed that although he’s now admired as a handsome model, he had no luck with the opposite sex as a teenager because of his youthful looks.He told The Observer magazine: ”I d…

Emma Watson, known best for portraying Hermione Granger in the Harry Potter film series, has been appointed a Goodwill Ambassador with the United Nations, it was announced today. Emma, who holds a bachelor's degree in Englis...

Allison Williams has got engaged to Ricky Van Veen.The ‘Girls’ star, who plays uptight aspiring singer Marnie Michaels on the HBO series, is set to marry her boyfriend of three years after he popped the question recently.A spokesperson for the 25-year…

Like many other adolescents, Jennifer Lawrence was bullied growing up. The 22-year-old Silver Linings Playbook actress changed schools because “some girls were mean.” She shared how there was a girl in middle school who g...

Cameron Diaz, the infamous blonde bombshell and What to Expect When You're Expecting star, is writing her first book - a guide for proper nutrition and staying healthy for young girls. The book will feature advice not only ...

One for the Money DVD good for a laugh

One for the Money, based on Janet Evanovich’s bestselling book, is a comedy/action hybrid. The movie starts off with Stephanie Plum (Katherine Heigl) losing her job selling lingerie at Macy’s. She is unemployed, broke an...

Priscilla Queen of the Desert – A Raucous Good Time!

The trend of movies being turned into glorious stage musicals is more popular than ever. Currently on the Toronto theater scene and one that shouldn’t  be missed is Priscilla Queen of the Desert.  The film, which was rele...

Rumor has it that Mary-Kate Olsen and Ashley Olsen are being considered as Bond girls for the upcoming 007 movie starring Daniel Craig. Producer Barbara Broccoli wants them to be the first Bond twins ever and is pursuing th... 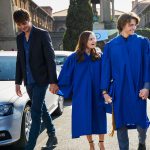