In TRON: Legacy, Sam Flynn (Garrett Hedlund), a rebellious 27-year-old, is haunted by the mysterious disappearance of his father Kevin Flynn (Jeff Bridges), a man once known as the world’s leading video-game developer. When... 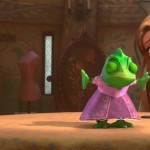 Maximus The Captain of the Guard’s horse, MAXIMUS, has made it his personal mission to capture the wanted criminal, Flynn Rider. Fearless in his pursuit, the horse defies danger to follow Flynn where other guards refuse to...

by Bonnie Laufer Krebs Pixar has done it again!!! It’s not often when a sequel comes along that trumps its predecessors—but Toy Story 3 is a movie that’s NOT to be missed. There’s no doubt that Toy Story 1 and 2 we...

The Art of Todd White – enter the contest

Mel may move back to Australia with ex-wife

Mel Gibson, 54, has apparently told friends he's moving back to Australia with his former wife of 28 years, Robyn, after tapes in which he threatened his ex-girlfriend were released to the press. Oksana Grigorieva claims Gib...

Justin Bartha was largely an unknown until his role as Riley Poole in the National Treasure series made him a star. He continued with steady roles in films like Trust The Man, Failure To Launch and The Rebound, before his rol...

Interview with Neal Bledsoe: Sex and the City 2

Toronto native Neal Bledsoe was over the moon when he found out he'd landed a small role in the much anticipated Sex and the City 2. The handsome hunk is best known for his breakout role in Gossip Girl -- especially for his ...

I wasn’t sure what to expect from The Twilight Saga: New Moon. Following the incredible success of Twilight, there would obviously be more money to spend on the sequel, so the special effects were bound to be better. Althou...

Kiefer Sutherland is set to propose to his girlfriend. The Hollywood hunk has been dating style director Siobhan Bonnouvrier for around two years. Although the twice-divorced actor has previously stated he has no desire to ti...

Australian actress Emilie de Ravin has moved from the small screen to the big screen in the upcoming romantic drama Remember Me (March 12). In the movie, de Ravin (Claire on TV’s Lost) plays Ally who becomes the object of affection of one brooding young man named Tyler, played by super hunk Robert Pattinson.